BIRMINGHAM — The Golden Bears completed a stunning one-year turnaround, dismantling LeMoyne-Owen 70-46 Saturday night at Bill Harris Arena to win their first conference title. LaByron Harris had 19 points, five rebounds, two steals and two blocks to earn tournament Most Valuable Player honors as Miles (21-8) earned an automatic berth into the NCAA Division II South Region tournament.
Miles' trademark defense, which is tops in Division II in points allowed and field goal defense, was on display against the Magicians, who had averaged 84 points over their first three tournament games. LOC became the eighth opponent that failed to get to 50 points against the Golden Bears this season. But the offense went to work in the title game, and LeMoyne-Owen (19-10) did little to resist.
The Magicians never led by more than three points, which last happened midway through the first half. But with the game tied at 15, the Golden Bears took control. All-Tournament team selection Jelani Watson-Gayle began a torrid stretch with a 3-pointer that gave Miles the lead for good at the 8:40 mark. For the next four minutes, LOC was blanked, missing its three field goal attempts and turning the ball over five times. Meanwhile, Watson-Gayle (15 points, five rebounds, four assists) drained two more 3-balls and Harris got a couple of buckets, the last as part of a 3-point play to cap a 16-0 run that put Miles ahead 31-16. The lead would grow to 18 before the Golden Bears went into the half with a 39-25 advantage.
Any thoughts LeMoyne-Owen had about getting back into the game in the second half were quickly doused as its halftime deficit was the closest it would be to the lead for the remainder of the game. The Magicians missed their first six shots of the second half and buckets by Damian Archer, All-Tournament selection Devonte Fuller and Harris had the Golden Bears lead to 20 points less than three minutes into the half. Miles shot nearly 50 percent from the field in the second half while LOC could only muster 31 percent, including misses on all six 3-pointers. The final four minutes were more a coronation than it was a competition as the entire Miles bench and the partisan crowd knew the celebration was imminent.
With the win, head coach Fred Watson tied Kirk Patrick for the most wins by a head coach in his first season at the school and he took home honors as the top coach in the tournament.
Tyrone Banks had 11 points and Tory Mason had 10 points and nine rebounds for LeMoyne-Owen. Archer (12 points, seven rebounds, five assists), Fuller (12 points, five rebounds), and Jose Roman-Angueria (six points, eight rebounds) had solid efforts for Miles. 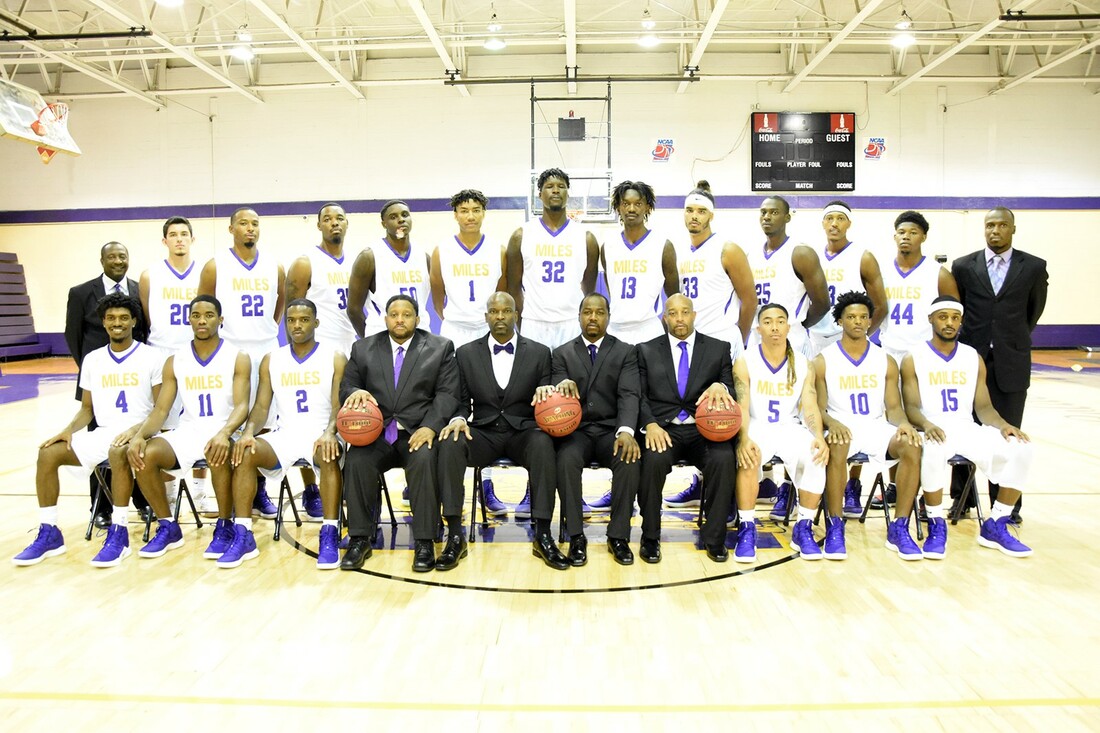 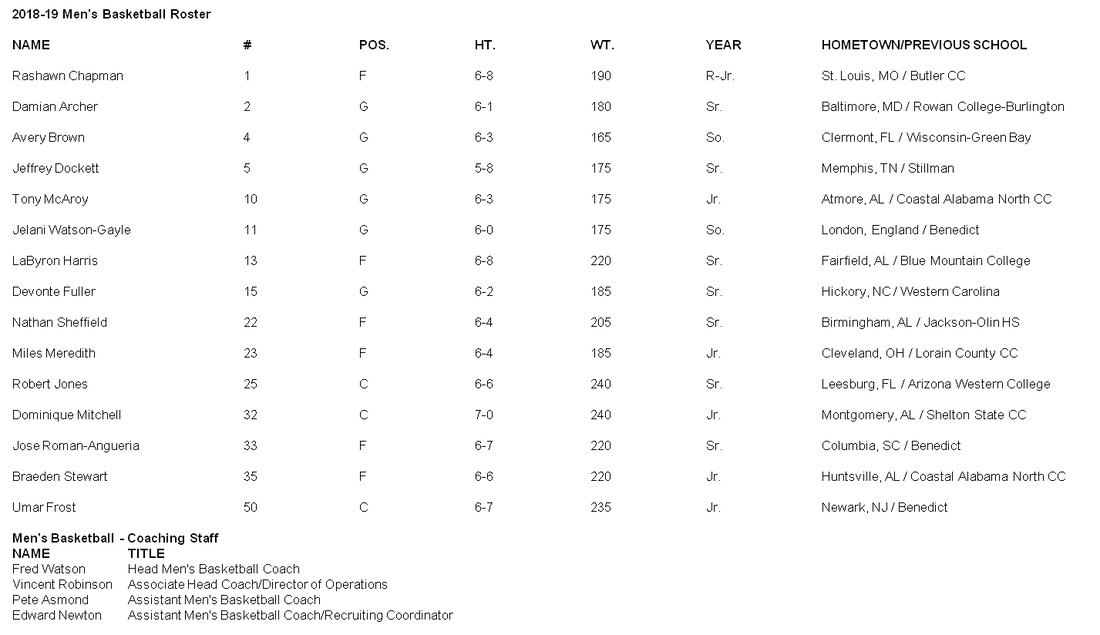 For the past week, the Miles men's basketball team knew it had earned a spot in the NCAA Division II national tournament. But Sunday night, the team congregated for a tournament watch party to find out who it was playing and where it was going.
The Golden Bears were given the No. 8 seed in the South Region tournament and will play host Nova Southeastern on Saturday in their first-ever trip to the Division II regional. The teams will tip-off at 4 p.m. and the winner will move one step closer to a trip to the national championship tournament in two weeks.
"It's an honor to have an opportunity to keep playing in the South Region (tournament)," said Miles head coach Fred Watson. "National champions have come out of this region. It's a really good region and we're just excited to be here."
But the Golden Bears are not just headed to Fort Lauderdale to get some sun. Watson said his team and his coaching staff are on par with each team in the region. Miles played four games against two of the teams in the regional (West Alabama and Delta State) and the scoring margin in those games were less than two points.
"We're going to have our work cut out for us but once you get to this level, everyone is very good," Watson said. "There are going to be a lot of elite teams and this (region) is one of the best in the country."
The opening game for the Golden Bears will feature contrasting styles. The Sharks (26-3) are currently the No. 3 team in the country -- also making their first NCAA appearance -- and are averaging almost 100 points per game, which is second in the NCAA. But gaudy rankings and big offensive numbers did not help NSU win the Sunshine State Conference tournament, where it lost to South Region No. 2 Florida Southern. Senior guard Devonte Fuller said this team will not cower as it works toward pulling the upset.
"We don't see them as some big team because they're ranked. We see them as just another team, just another game. So that's how we're going to prepare for it this week," said Fuller, Miles' leading scorer.
The Golden Bears will continue to rely on their stout defense, which is the only one in the nation that does not allow 60 points per game and also leads the nation in defensive field goal percentage.
"Like Coach Watson said, our defense can always be there, even when our offense is not," said senior guard Damian Archer. "Our defense is consistent and that's what we've been winning with all year." 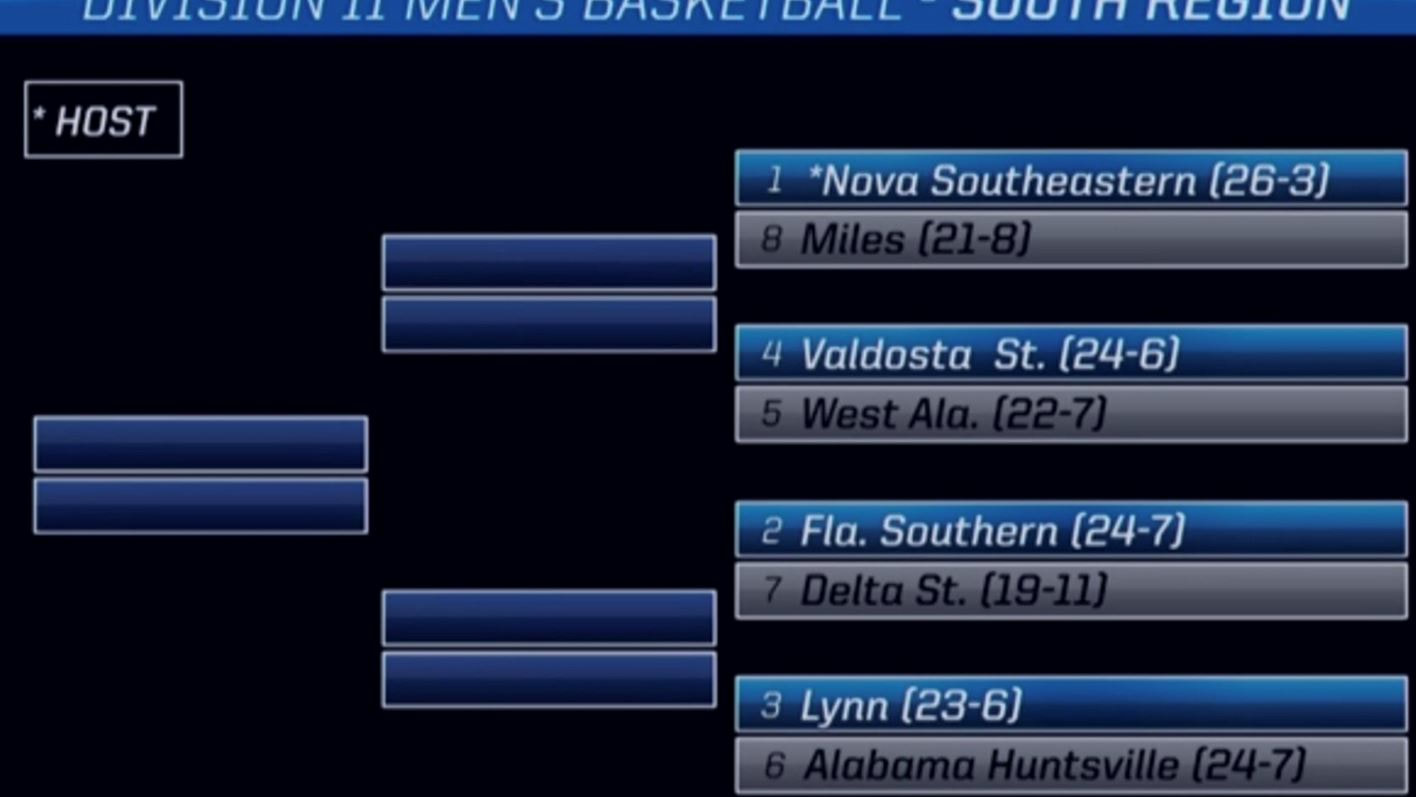 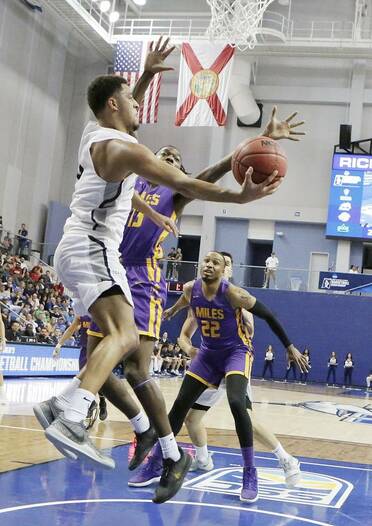 NSU’s Connor Zinaich, left, goes for a shot against Miles Golden Bears on Saturday, March 16, 2019 at Rick Case Arena in Fort Lauderdale. Zinaich had game highs in points (25) and rebounds (nine). ANDREW ULOZA FOR THE MIAMI HERALD
​
Five against seven — that’s what it’s like to play against Nova Southeastern University’s men’s basketball team, ranked fifth in the nation in Division II. Just ask Miles College, which lost to the Sharks 80-66 Saturday night in host NSU’s first NCAA tournament game. “We knew they were going to pressure us, and that’s why we practiced five-on-seven all week,” said Fred Watson, who coaches Miles, located in Fairfield, Alabama. But even with that unique practice strategy, Miles couldn’t solve NSU’s pressure.
The Sharks (27-3) forced a whopping 26 turnovers and held Miles to 43.4 percent shooting, including just 4 of 16 on three-pointers, as they advanced to Sunday’s South Region semifinals, also at Rick Case Arena.
NSU will play West Alabama Sunday at 7:30 p.m. The other half of the semifinals will feature a matchup between Florida Southern and Lynn at 5 p.m. Sunday.
When the tournament started Saturday, there were three teams representing the Sunshine State Conference, and all of them advanced: NSU, Lynn and Florida Southern. “This could be the strongest league in the country,” NSU coach Jim Crutchfield said. “It’s not just because of the teams playing here who qualified. It’s because of the depth in our league. Every team is tough.” But no SSC team has been as consistently tough this season as the Sharks, who were led on Saturday by Connor Zinaich, who had game highs in points (25) and rebounds (nine). His effort helped NSU — which held a slim lead during a 31-30 first half — blow out Miles after intermission. “I knew my teammates — [point guard David Dennis] especially — were going to put me in position to score the ball,” said Zinaich, who had a 39-point game earlier this season. “Once that opened up, everyone started to hit threes, and we went from up one to up 20 just like that.” Zinaich led four NSU scorers in double figures. Mikkel Kolstad had 16 points, going 5 of 6 on three-pointers; Dennis had 14 points, eight assists and five steals, turning the ball over just once in the second half; and Mark Matthews had 11 points, seven rebounds and five assists.
There were about 900 fans in the arena, which doesn’t sound like much. But it’s way more than NSU games used to draw when the highly successful Crutchfield arrived on campus before the start of the 2017-2018 season.
Saturday’s crowd was not just improved, but also loud. “It goes hand in hand,” Crutchfield said. “When you get runs with pressure [as NSU had in the second half], the crowd gets into it, and it feeds into the adrenaline of the players.”
The Sharks, if they keep winning will also play at home Tuesday night in the South Region final. And with two added victories today and Tuesday, NSU would be halfway toward the six victories it needs to win a national title. “Home court helps a lot,” Zinaich said. “The fans have been there for us, and we appreciate it.”
Added Dennis: “The way we play is fun to watch. We put up a lot of points and get up and down. The more we win, the more people will come.” 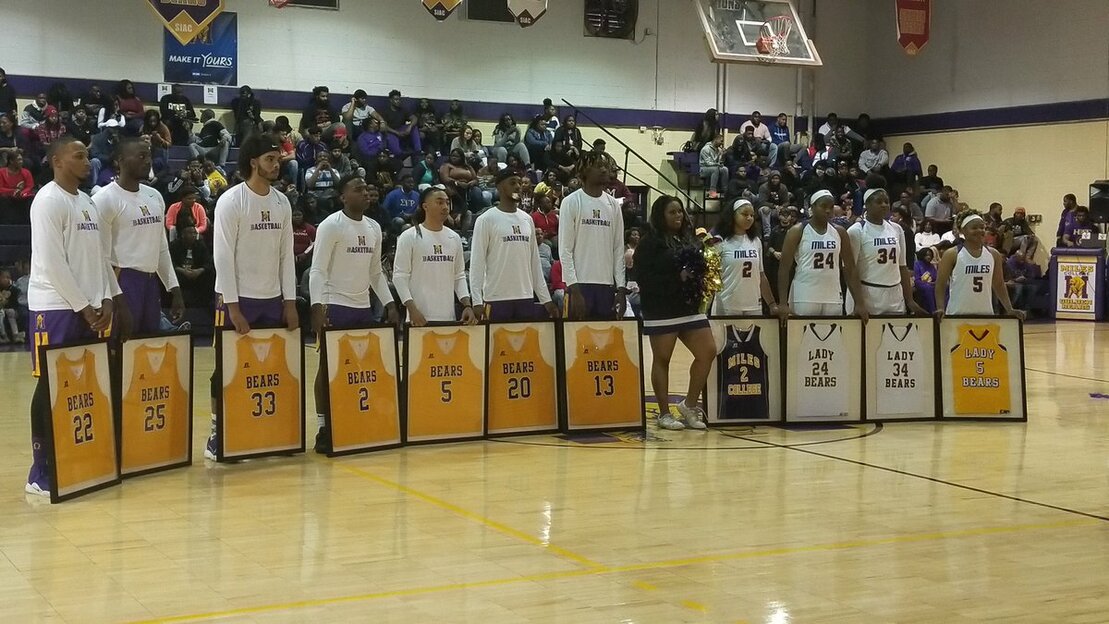